Huey Long began his career as a traveling salesman, displaying a knack for connecting with the common man, a skill he would later apply as a young attorney defending the disadvantaged. These experiences laid the foundation for a future in politics.

Having refused to enter twelfth grade and unable to afford college, Huey became a traveling salesman at age 17. For four years, he traveled the South selling everything, from canned goods to patent medicines. Huey liked the work and he was good at it, despite going broke occasionally when a company would fold. It proved to be the "school of hard knocks."

Huey was a natural salesman and immediately exceeded all expectations. He learned how to advertise, draw a crowd, and dress well to make a good impression. He found that music not only attracted people but put them in a buying mood. Most importantly, by visiting people's homes, he learned how they lived and how to connect with them. All of these elements would later appear in his campaigns for public office.

Although he was successful at his craft, the life of a traveling salesman was not easy. Steady jobs were hard to come by, and sometimes his employers went out of business due to a faltering national economy. On several occasions, Huey fell on hard times and was forced to sell his possessions, including the coat off his back. At different times, he slept on a park bench and in a rice bin when he had no money for lodging, and he used his clothes as collateral to buy a meal. These experiences gave Huey a keen appreciation for neighborliness and empathy for those who risked losing all they had because of one bad break.

Huey met Rose McConnell at a baking contest he had organized in Shreveport to promote a lard substitute called Cottolene. Instantly smitten, he deftly awarded the top two prizes to Rose and her mother. He married Rose in 1913, and they had three children: a daughter named Rose and two sons, Russell and Palmer.

When the sales jobs dried up, Huey cobbled together three semesters of law classes at the University of Oklahoma and Tulane University in New Orleans. At age 21, Huey convinced an examining board to allow him to take the Louisiana bar exam, and he passed easily. (Visit Education to learn more about Huey's unconventional legal training.) He returned to Winnfield to practice law, where he and Rose set up their first home.

Tell Uncle George that they should feel complimented – that Huey Long don’t take out after topwaters but after the big fish.”

— Huey Long, after taking a law case against the bank run by his uncle

In 1915, Huey opened his law office above the Winnfield Bank, where his Uncle George was bank president, using a wooden dry goods box as his first desk. (Rose sewed a cloth skirt for his “desk” to make it more presentable.) Huey stated proudly that he never took a case against a poor man and won notoriety for successfully representing a widow against the bank.

As a young attorney, Huey waged the first of many battles with the Standard Oil Company, the dominant oil producer – and political force – in Louisiana. In 1921, Huey represented a small oil company in a lease dispute against Standard Oil, and as a member of the Public Service Commission he sought to regulate the oil giant's pipeline activities. While both efforts were unsuccessful, he would later succeed as governor in levying taxes on Standard Oil to fund his education programs. Standard Oil retaliated by attempting to remove Long from office.

Huey moved his family to Shreveport in 1918, where he primarily represented small plaintiffs against large businesses, including workers’ compensation cases. He made a name for himself by taking on the biggest businesses in town and became unpopular among the upper class. Huey also lobbied the state legislature for workers’ compensation reform and developed a reputation as an outspoken reformer.

With his legal successes, Huey could have become a wealthy attorney, but the lure of politics was his true passion.

Huey Long's home in Shreveport, built with the legal fee from his largest case.

The House the Bank Built

In his largest case, Huey represented an employee of the Commercial National Bank, whom the bank had slandered and sued for endorsing a loan that went bad. When no one in town would take the case, Huey accepted the challenge, working feverishly – even taking a hotel room for two months to minimize distractions. He won the case, saving his client $200,000 and earning himself a $40,000 fee paid by the bank. He used the windfall to build a home for his family in Shreveport.

Next page
Entry Into Politics 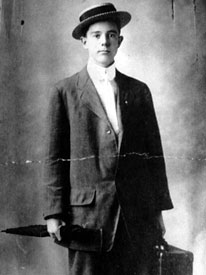 Huey Long as a traveling salesman.

I never took a case against a poor man.” 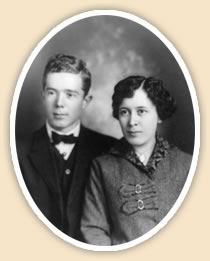 In 1913, Huey married Rose McConnell, whom he had met at a baking contest he organized as a traveling salesman. Huey wrote the following letter to Rose's mother shortly after their marriage:

“You can never imagine how happy she and I are. She is the sweetest girl in all the world, and I love her every day. …She seems to be so happy, and mother I could never in the whole world have been happy without her.

“Rose is putting on her little pink dress and she certainly looks sweet in it. Why she outshines these girls here by 40 acres or more.” 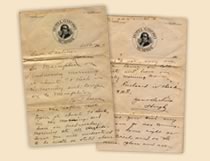 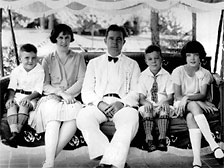 Huey and his family on the porch of their Shreveport home (son Palmer and wife Rose on left, children Russell and Rose on right).

Courtesy of State Archives of La.