In 1929, Standard Oil’s legislative allies led an unsuccessful attempt to remove Huey Long from the governorship on a variety of charges, ranging from serious to comical. He was impeached in the House but avoided conviction in the Senate.

In order to finance his building and social programs, Huey called a special session of the legislature to enact a 5 cent-per-barrel tax on the production of refined oil. The bill was met with a storm of opposition from the state’s big oil interests, and opponents in the legislature moved to impeach Huey on charges ranging from misuse of state funds to using “abusive language.” 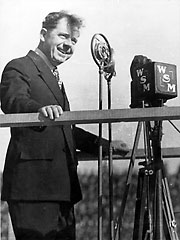 Huey on the speaking circuit

Huey responded with a statewide campaign to make his case that Standard Oil and his political opponents were conspiring to retake state government using the trumped-up charges against him. He asserted that legislators had been offered as much as $25,000 for their votes to remove him from office — or enough money "to burn a wet mule".

Of the original 19 charges, eight items were passed in the House. When the trial moved to the Senate, Huey produced a document signed by over one third of the senators, stating they would vote against impeachment because the trial was illegal. With the two-thirds majority required to convict now impossible, Huey’s opponents halted the proceedings.

Huey’s opponents formed a society in New Orleans called the Louisiana Constitutional League, which was dedicated to digging up dirt on the governor and restoring the office to the planter class. Huey called the group the “Constipational League.”

After the impeachment, Huey became determined to fight fire with fire when dealing with his enemies. “I used to try to get things done by saying please,” he later told reporters. “Now I dynamite them out of my path.”

With the state’s major newspapers financed by his opposition, in 1930 Huey founded his own newspaper, The Louisiana Progress, which he used to make the case for his programs and publicize his achievements. After impeachment, Huey received death threats. His New Orleans home was the target of a drive-by shooting and several arson attempts. Fearing for his life and the safety of his family, he began surrounding himself with armed bodyguards. 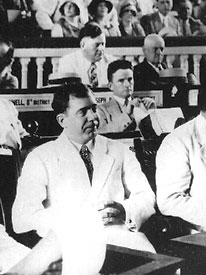 Huey Long at the impeachment proceedings.

We condemn as being vicious, dangerous and utterly without merit, any and all systems of taxation [that] seek to impose tax burdens upon industries [in Louisiana].”

You can impeach for whatever you want to impeach for — for any act not consistent with the duty of the office. It is not like a criminal or civil court.”

The Finest Government Business Can Buy

Under a “gentleman’s agreement” with Governor John Parker, Louisiana’s two-cent severance tax law had been written by the legal department of Standard Oil and rubber stamped by the Legislature. Standard Oil financed impeachment rallies against Huey Long, where the company’s band provided the entertainment.

“Pro-Long” rallies attracted larger crowds, to the chagrin of the newspapers, which were uniformly aligned with the “anti-Long” corporate interests. In one case, a newspaper ran photos of both rallies, but reversed the captions to create the impression that the impeachment movement had more support.