Shortly after he became governor, Huey Long launched a major road-building program to transform Louisiana’s antiquated patchwork of dirt and gravel roads into a network of paved roads linking every part of the state. The new roads improved daily quality of life, reduced the cost of doing business, and facilitated commerce in the state.

A stretch of gravel road was a joyous encounter, a hard-surfaced highway was a mirage politicians prated about but never laid down.”

— from the Gov. Richard Leche inaugural program, The New Louisiana

In 1928, Louisiana had roughly 300 miles of paved roads, only 60 miles of which were maintained by the state. Most ‘highways’ linking major towns were rutted, winding dirt roads that turned to thick mud in the state’s frequent rains. Farmers struggled to get their crops to market, and it was common to wait days to travel until the roads dried out. Cars often became stuck in the mud, and it was common practice for travelers to prevail upon local farmers to pull their cars out with a team of horses or oxen. 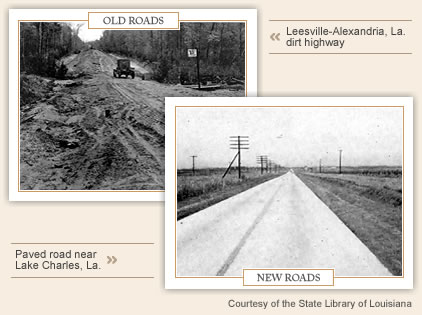 It was a struggle for Louisiana’s 60 percent rural population to get anywhere, including to reach hospitals, schools, or a voting booth. Families had become accustomed to doing without.

The Long administration implemented an ambitious road-building program that employed 10 percent of the nation’s highway workers — 22,000 men. By 1932, the state had 5,000 miles of new paved and gravel roads. Four years later, there were 9,700 miles of new roads and 111 bridges, doubling the size of the state's highway system.

The new roads not only lowered the cost of doing business, but they saved the average driver more than $118 per year ($1,400 in today's dollars) in gasoline and maintenance. Trips that had previously taken days were reduced to a few hours. Travelers could drive from Shreveport to New Orleans in a day, a trip that had previously cost eight dollars in ferry tolls and three nights in hotels. (See sidebar about Airline Highway.) 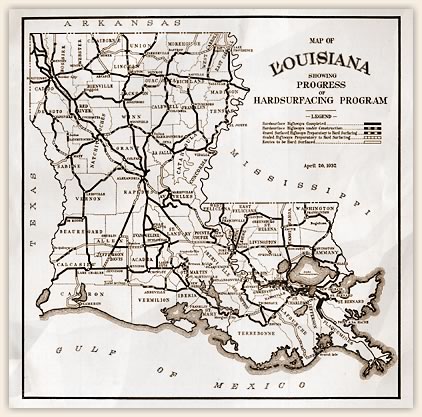 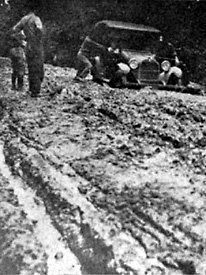 Car stuck in the mud on a typical Louisiana road before Huey Long.

It took a millionaire with the constitution of an ox to go from one place to another in the Louisiana of 1928, a millionaire who was something of a trail blazer and expert woodsman, to boot.”

— from the Gov. Richard Leche inaugural program, The New Louisiana 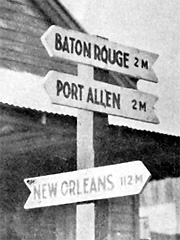 Signpost on the old road between Baton Rouge and New Orleans.

To travel the 80 miles between Baton Rouge and New Orleans, it once required a day’s drive along the River Road, a 120-mile dirt highway winding along the banks of the Mississippi River. The new ‘Airline Highway’ – a straight concrete road linking the two cities – reduced the trip to less than two hours. The highway earned its name from being straight as an airport runway.

Ironically, the road was not complete when Long was fatally shot in Baton Rouge. The trauma surgeons summoned from New Orleans could not reach Long in time driving along the old River Road.

“Who will ever forget the perils and the inconveniences and the nightmarish experiences of that 120-mile drive?” (The New Louisiana) 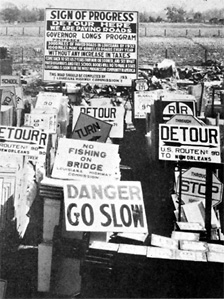