From an early age, it was evident that Huey Long was a true original. A bright, inquisitive, and feisty child, he would grow to become the most famous – and audacious - public figure ever produced by the state of Louisiana.

Huey Pierce Long, Jr. was born on August 30, 1893, in Winnfield, a small rural community in the piney woods of north central Louisiana. He was the seventh of nine surviving children born to Caledonia Tison Long and Huey Pierce Long, Sr., a livestock farmer.

At age 8, Huey was deeply affected when he witnessed a neighbor lose his farm at a sheriff’s auction, a sale organized to pay the debt a farmer owed to a store.

Standing on the steps of the courthouse before the sale, the farmer begged the crowd not to bid on his home, promising to pay the store if given enough time to harvest another crop. No one in the crowd offered a bid.

Just as the sheriff was ready to declare “no sale,” the creditor made a bid and won the farm, rendering the farmer and his family homeless.

“The poor farmer was out,” Huey remembered. “I was horrified. I could not understand. It seemed criminal.”

The Longs were fairly well-off by the standards of Winn Parish, one of the poorest parishes in a very poor state. Most frontier families lived in abject poverty, surviving on what they cultivated, with little opportunity for leisure, education, or cultural growth. Neighbors relied on one another for survival.

Little Huey was forever resisting the boundaries established to restrain him. He learned to walk at eight months and was soon discovered playing among the livestock, much to the frustration of his parents and siblings, who were always chasing after him. His father built a cover for their water well out of fear that Huey would jump in, “just to see what it was like.” 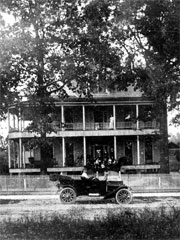 Small for his age, Huey was not like the other boys in his community, who amused themselves with outdoor activities like hunting and fishing. He disliked farm work and loved to read books, which were scarce in his community. He was intensely curious and determined to understand how things worked. When a train rolled into Winnfield, it was common for little Huey to crawl underneath it to get a closer look, delaying its departure until somebody pulled him out.

When it came to work, he preferred anything to the monotony of farm work. His jobs were many and varied, from delivering baked goods to setting newspaper type, but sales work was his favorite.

Winnfield was a stronghold of populism, a political philosophy popularized in the nineteenth century that championed the needs of the common man over the interests of corporations and the wealthy elite. Huey grew up listening to the old-timers complain about the corrupt and indifferent political establishment that ran the state and how things should be different. As a youngster, Huey had no inhibitions about chiming in and offering his own opinions.

Remembered as “a pesterance” by one observer, Huey freely interrupted checkers games to tell grown men how to play their next move. His parents rarely scolded him for his audacity and encouraged individual expression and competition among their children.

Huey’s parents were better educated than most, and they stressed the importance of education to all of their childen. The Longs were also a deeply religious family, studying the Bible daily, attending church twice a week and never missing a gospel revival.

Huey’s mother was universally remembered as a remarkably tolerant and compassionate woman, often sending her children to the homes of less fortunate neighbors with gifts of food and clothing. Caledonia Long imbued her children with a strong sense of righteousness and fairness. In addition to her values, Caledonia appears to have passed her brilliant intellect and photographic memory to Huey. 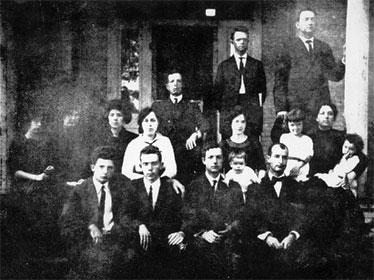 The Long family gathered in 1913 for the funeral of Huey's mother, Caledonia Tison Long. (Huey, age 20, is seated in the first row, second from left.) Caledonia did not live to witness the remarkable achievements of her younger children. 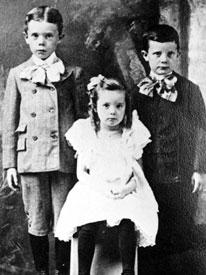 Huey Long as a child (left), with brother Earl and sister Lucille.

Young Huey would jump in a well ‘just to see what it was like.’”

Huey's parents, “Hu” and Caledonia Long, were determined to teach their children enough “to be somebody.” Of their four sons and five daughters, two became Louisiana governors (one also a U.S. Senator), one U.S. congressman, one district attorney, and five school teachers (including a university professor).

Huey’ great-grandfather, James Long, was an itinerant Methodist minister from Baltimore, Md. In 1841, a preaching assignment took him to Mississippi. His son, Huey’s grandfather, John Murphy Long, was an early settler of Winn Parish, La. For 25 cents an acre, John Long homesteaded 640 acres of woods and carved out a farm for his large family of 14 children. Later, his son Huey (Sr.) purchased 320 acres near the new parish seat of Winnfield as a home for his young family.

Later known as “Old Hu,” Huey, Sr., prospered as a livestock farmer and a self-styled entrepreneur. He raised cattle and hogs for market and always had an eye for income opportunities, such as contracting to deliver mail and selling off home lots as the town grew.

A Focus on Faith

The Longs were a deeply religious family, with Bible study as an integral part of their home life. Sunday school, church, and Wednesday night prayer meetings were mandatory, and they never missed a gospel revival.

Described by her children as a “rock-ribbed Baptist,” Caledonia Long insisted that all of her children know the Bible backwards and forwards. She devised a game that she played with the children after supper, where each child was called upon to read a page from the Bible aloud and then recite it from memory. Gifted with a photographic memory, Caledonia was usually the winner.

At 13, Huey was baptized in a fish pond and became a member of the First Baptist Church. He was so moved by the experience that he briefly considered becoming a preacher and donated three weeks pay (nine dollars) to the church from his job driving a bakery wagon. Thereafter, he tithed 10 percent.