As part of his state modernization program, Huey Long tripled the size of Louisiana State University (LSU), opening enrollment to all able poor students and building it into one of the finest universities in the South.

A favorite story about Huey Long's devotion to Louisiana State University recounts when the circus was scheduled to come through town on LSU game day. Long feared that the parade of animals through Baton Rouge might reduce attendance at the LSU Tigers' football game.

The Governor called the circus owner to ask him to postpone the parade until the following day. When the owner refused, Long replied, “Fine. As you know, Louisiana has a flea-dipping law and you’ll be expected to dip the elephants upon crossing the state line.” The circus was rescheduled.

In 1928, LSU was a small-time country school that generated little interest or attention in the state. Labeled a “third-rate” institution by the Association of State Universities, the school had only 1800 students, 168 faculty members, and an annual operating budget of $800,000.

In 1930, Huey Long initiated a massive building program on campus to expand the physical plant and add departments. By 1936, LSU had the finest facilities in the South, a top-notch faculty of 394 professors, a new medical school, more than 6,000 students, and a winning football team. In only eight years, it had risen in size from 88th in the nation to 20th, and it was the 11th largest state university in the nation. 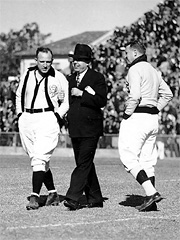 Huey Long on the gridiron with referees before a Louisiana State University football game.

To generate excitement for LSU, Long’s first step was to quadruple the size of the marching band (from 28 to 125) and develop a first-rate football team. He became the state’s most prominent ‘Tiger fan’ – coaching plays, giving locker room pep talks and personally recruiting top talent for the team. LSU fever swept the state, as reduced tuition and need-based scholarships allowed students from all regions to flock to Baton Rouge to study.

Long financed these improvements by arranging for the state to purchase acreage from the LSU campus, which adjoined the grounds of the new State Capitol building. To the consternation of his critics, Long essentially diverted $9 million for LSU’s expansion and increased the annual operating budget to $2.8 million. 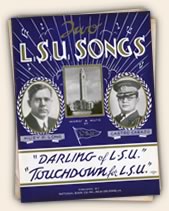 Huey Long's love of music and “his university” inspired him to write a number of songs for Louisiana State University, in collaboration with good friend Castro Carazo. These include “Darling of LSU” and “Touchdown for LSU”, which is still played before every LSU football game. 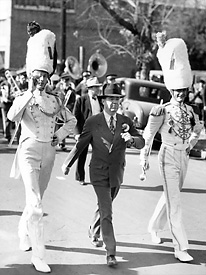 Huey Long marches with the Louisiana State University band. Long's first step to generate excitement for LSU was to quadruple the size of the marching band.

Huey Long standing in front of a train of Louisiana State University students on their way to a football game. 'Ole War Skule' is a reference to LSU's founding as a military academy after the Civil War.

When Long had an announcement for the student body, a large gong on campus signaled everyone to rush to the Greek theatre to hear the Governor. In 1934, Long announced that he had arranged for several trains to carry the entire student body to the Tigers’ away game at Vanderbilt University in Nashville to boost the team’s morale.

“He gave $7 to any student needing it in order to go to the game,” photographer Fonville Winans recalled. “He accepted IOUs for the amount. Eventually, he ran out of money and, turning to [LSU] President Smith, says, ‘Jimmie, you got any money?’ Jimmie produced a big roll of bills and the ‘dole’ continued.” 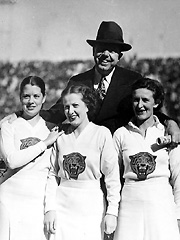